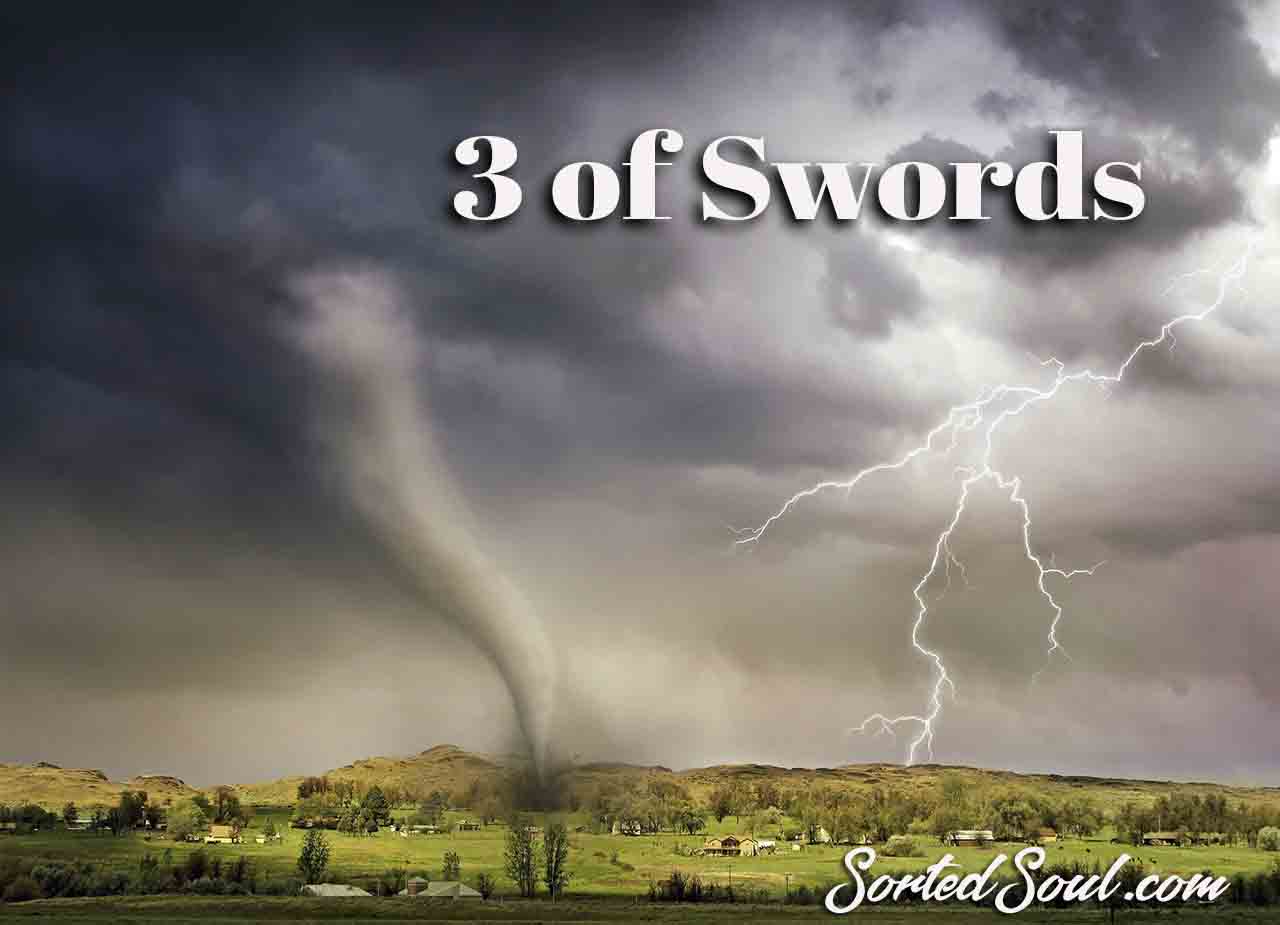 The Three of Swords is one of those Tarot cards that looks to be very direct and simple on first inspection. In the traditional RWS Tarot, a heart is pierced not once, not twice, but three times. The heart is the main image on the card. So, clearly this card is about heartbreak, betrayal, pain, sorrow and grief.

Let’s take a step back from the imagery on the card and examine it from a distance: First in the suit of Swords and then as the number Three. From this vantage point, I’m going to argue that this card is rarely about matters of the heart.

The Suit of Swords

The suit of swords embody the element of Air. Air encompasses all things intellectual, having to do with the mind, ideas, intellect.

Swords are creations of the mind, conflicts of the mind, journeys of the mind. Everything we think or imagine is caught up in the suit of swords. Swords can create conflict when opposing minds interact, and they can also create powerful movements when like minds work together.

If, as many believe, the primary meaning of the Three of Sword’s is “heartbreak and betrayal” in the emotional sense, as in a lover who has cheated on you, should it not be found in a different suit? Cups perhaps?

This card is a sword. It deals with intellect. The intellect sees things in logical, practical ways. The energy of heartbreak, or betrayal is not logical or practical. Rather it’s one of intense raw emotion. A cups energy, no? Or perhaps even wands – passion.

Intellect. Logic. Thoughts. Ideas. These can bring with them conflict or cooperation. Some people think of the suits of swords as aggressive, and from the imagery in the RWS, it’s not hard to see why. In my opinion, there has been an unnecessarily heavy emphasis on the negative side of air/mind in the RWS imagery.

Keeping our focus on Tarot being about us and for us, not done to us, we can completely eliminate the meaning of betrayal.

Rachel Pollack in The New Tarot Handbook states three is “a flowering of something created from the energy of the suit.”

Brigit Esselmont in Everyday Tarot states Creativity as the basic meaning of the numbers.

How do any of these descriptions of the theme for Three bring up the ideas of betrayal or heartbreak? If you ask me? They don’t.

I think that the Three of Swords can mean betrayal and heartbreak or grief, but very often it will not. Just as the Death card 99 times out of 100 does not mean physical death.

If I were to give this card a single keyword, only considering the suit and number themes I would choose the word focus.

Looking at the RWS imagery of the Three of Swords, three swords focused on one spot in the heart, I see:

Can we then think of the heart on this card as representing ideas that are important or weighty? The subject is something near and dear to your heart, but an idea nonetheless.

Looking at the heart you will see that despite the 3 piercing swords it is a whole heart, completely intact, red and vibrant. To me this whole heart is not one facing betrayal. Scrutiny or Questioning? Yes, perhaps. But these three swords are acting on the same issue, they may not have the same views, but they all care about the same thing.

For all of these reasons, I’d like to push the pause button on the words betrayal and heartbreak.

Here’s an expanded set of generalized keywords for the Three of Swords based on my take on the card and in no particular order:

What are some keywords that come to mind for you when thinking about the Three of Swords from number/suit approach?

And that leads us to another question: If not the Three of Swords, then which cards do mean sorrow, grief and betrayal? If you like, I can write a blog post about my ideas about this. (Because you know I have them!)